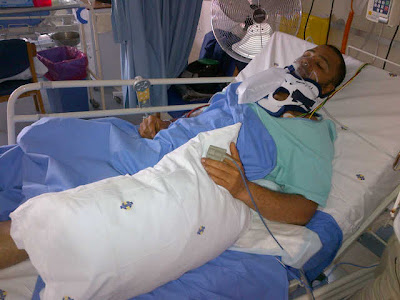 …Flown abroad in an air ambulance
Question Mark Records boss, Kelvin Luciano- Gabriel was involved in a fatal accident and almost lost his life in the process. According to a source, the record label owner around 3am in the early hours of Saturday Oct. 1 2011, was involved in a ghastly accident alongside four other friends on their way home from Congress Lounge, Abuja. They were all rushed to a nearby hospital and but kelvin was later transferred to another hospital when he wasn’t responding to treatment.
No one can explain how the accident happened, but as you read this the ever bubbling guy is currently in one of the countries overseas as further treatment was required. He already has three broken ribs, a left lung that went flat and was also flown out in an air ambulance.
We must say this is really touching and may the Lord let the ever happy guy get back to his feet soon.

Julia Fox shares steamy snap of she and boyfriend, Kanye West getting frisky

Beautiful loved-photos of Lateef Adedimeji and his wife

Schoolteacher brutalises 10-year-old over pot of soup in Benue

I was called ugly, criticised while dating my husband -Naeto C’s...

Adorable photos of Tboss and her daughter