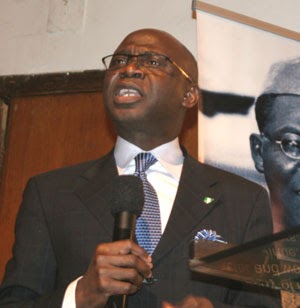 The Convener of the Save Nigeria Group, Pastor Tunde Bakare, on Wednesday asked the National Assembly to immediately commence impeachment proceedings against President Goodluck Jonathan.
Bakare, who spoke at the SNG rally at Ojota, Lagos, organised to demand the restoration of the N65 pump price of petrol, said Jonathan had committed and impeachable offence by acting on an item in a budget yet to be passed.
A number of personalities also spoke at the rally, which witnessed a much larger turnout than Monday and Tuesday.
Among them were Ganiat, the wife of late human rights lawyer, Chief Gani Fawehinmi; her son, Mohammed; the Executive Director of the Muslim Rights Concern, Dr. Ishaq Akintola; the President of the Campaign for Democracy, Dr. Joe Okei-Odumakin; and her husband, Yinka.
Some of the speakers also urged Nigerians not to allow outlawed Islamic sect, Boko Haram, to instigate them into a religious war. They said the sect was not representing Islam by its violent activities and killings.
Also, some musicians entertained the crowd with songs while actors, actresses and comedians also lent their support to the call for the return of the fuel subsidy.
Punch

Ladun Liadi - September 17, 2021
1
The Taliban appear to have shut down the women's affairs ministry and replaced it with a department that once enforced strict religious doctrines. On Friday,...

BBNaija: I feel hurt Queen wanted to sleep with Cross –...

Churchill and Rosy Meurer show off their son’s face for the...

Don’t troll me if you are ugly and have smelling wig...