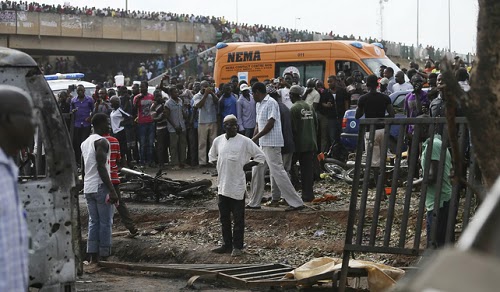 A bomb blast that occurred last night around 7.45pm in
Jimeta, Yola, the Adamawa State capital has killed 27 people, the National
Emergency Management Agency, NEMA, confirmed.
The police also confirmed a suicide bomber was behind the
blast. The scene of the blast is said to be very popular for night buyers and
sellers of meat, cooked food and other foodstuffs.
A woman who sold cooked food with her daughters, 20 and 24
had asked them to pack and meet her at home few minutes she left the market,
not knowing it would be the last time she would be seeing them. She was however
inconsolable minutes later after hearing about the bomb blast.

Ladun Liadi - December 1, 2021
4
Darey Art Alade, and his wife, Deola are celebrating their 15th wedding anniversary. Sharing a loved-up picture of himself and his wife on his Instagram...

Dowen College: Twitter user walks out on Priest after he suggested...

”Countries should come together to take a common approach” – Nigeria...