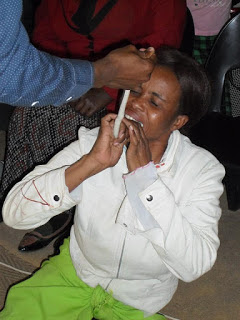 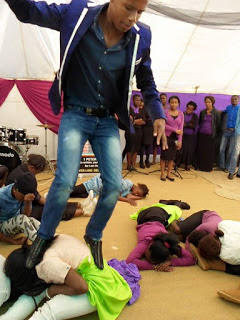 Funny enough he was not even arrested by the South African
government but by the Society for Prevention of Cruelty Against Animals, who
found it offensive for the prophet to feed his congregation with live snakes.

Penuel Mnguni, a preacher in South Africa who allegedly
ordered his congregation to consume live snakes has been arrested on animal
cruelty charges, RDM News Wire reported. Controversy ensued after pictures of
the congregation eating snakes were posted on the church’s Facebook page last
week.
The controversial preacher, who heads End Times Disciples
Ministries in Soshanguve, north of Pretoria, told his congregation the snakes
would taste like chocolate. He is to appear in the Ga-Rankuwa Magistrate’s
Court today, 20th of July, 2015 to face animal cruelty charges
brought by the Society for Prevention of Cruelty Against Animals.

“We are conducting a preliminary inquiry with an intention
of opening a criminal case against him (Mnguni),” said Mishack Matlou‚ a
society inspector.  “What we saw in the
pictures is cruel. Imagine being eaten alive! This has to stop,” he said.
Mnguni has also been the subject of controversy in the past
when he made his followers eat hair and rags, claiming God has the power to
make a person eat anything and that his teachings were based on the scripture.
At another occasion, Mnguni said he learned his extreme
teachings from Rev. Lesego Daniel of Rabboni Ministries, who forced his
congregation to eat grass and drink petrol.
The End of Time Disciples Ministries has about 100 to 150
followers and is inside a small tent in a poor area.

I will chew you raw if you insult Oyedepo: Ibiyeomie warns

Ooni celebrates his daughter on her 28th birthday

Actress Peggy Ovire celebrates self as she turns a year older

Fan questions Davido’s sister, Sharon for wearing a bikini since she...

Prisoners in Nigeria have a right to vote in 2023 elections...

How internet obsession has affected this generation – Toke Makinwa