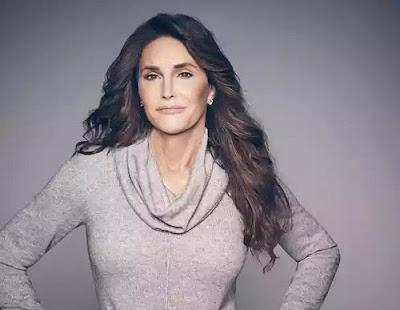 As a champion athlete, Bruce Jenner invented the victory lap after taking a spectator’s flag and running around the track a tradition that continues to this day.

Now Jenner is at the forefront of a new revolution for, after ‘transitioning’ to become Caitlyn, the Olympic gold medal-winning decathlete has become the world’s most famous transgender woman.

And in a rare and remarkably frank interview, the star of Keeping Up With The Kardashians – the popular reality show about her extended family – has revealed some of the unexpected benefits of becoming a woman.

‘When people ask me about my new life as a woman, they always ask the same question about my golf game: “Are your breasts going to get in the way?” ’ she says.

‘The answer is no, my game is still really good. And to be honest, the breasts are really good for putting.

I used to put a sock under my arm to help keep my arms straight, but now I don’t have to do that any more because I can hold my arms against my breasts, so it’s perfect.’

But along with the highs – not to mention the international attention that her sex change has attracted – came the lows and self-doubt that have plagued Caitlyn since childhood.

Speaking before a new series of her own reality TV show I Am Cait is aired, the 66-year-old – who had gender-reassignment surgery last year and has since featured on the cover of Vanity Fair magazine reveals the inner torment that led her to become a woman late in life.

And she insists that assuming a new female identity has not changed the person inside.

‘This woman who I am now has lived inside me for all of my life, but Bruce is inside me, too,’ she says.

‘I still fly planes and I still go to the racetrack. I still do all that fun stuff and why not? Girls can do it too. I still have my same views, my same relationships with people all of that is the same.

‘One thing that has changed is that I am much more comfortable in going out in public. In the old days, I never went out, even with the family I dreaded it. These days we are going out. Going to dinner, going to an event, being with my girls [her community of transgender girlfriends]. Life’s become much more fun.’

Caitlyn also reveals how her belief that she had been born in the wrong body had blighted her childhood.

After years of feeling she was living a lie, only now, in her 60s, does she feel that her gender confusion has been resolved.

‘I’ve been dealing with the issue of being transgender since I was a young kid,’ she  explains. ‘Back in the 1950s and 1960s, these were issues you couldn’t talk about with your parents or with anyone.

‘I was a dyslexic kid, suffering from low self-esteem, thinking everyone else was smarter than me, better students than me, and the only thing I had going for me was sports, which I was pretty good at. So I hid all my issues in playing sports. It was my way of proving to the world that I was worth something, and it also distracted me from my real issues in life.

‘But the day I broke the world decathlon record at the 1976 Olympics in Montreal was the day I retired from athletics. I knew I had to move on in life because there was nothing else in sport for me to achieve.

‘I remember waking up the next morning and looking in the mirror with not a stitch on and the gold medal around my neck, and it being a really scary moment. I was thinking, “Where do I go from here? What is my next distraction going to be? I don’t even have to work out today – what am I going to do?” ’

After winning the gold medal, Jenner became the poster boy of American athletics, which in turn led to a lucrative TV career that, Caitlyn admits, allowed her to keep running from her demons.

‘The next day, the TV studio ABC called up and offered me a job and for the next 30 years I dived into that and into my family,’ she adds. ‘I was constantly living distractions.’

Ladies, would you rock this Jordyn Woods’s crystal chain dress?

Ladun Liadi - September 16, 2021
2
Internet sensation, Mompha has demanded an apology from EFCC over alleged libelous publication made against him. His full statement below... ''DEMAND FOR A RETRACTION AND APOLOGY...

Pasuma announces the birth of his grandchild

One dies as soldiers nab policeman with 370 bullets in Jos