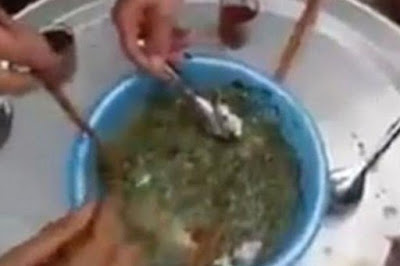 A group of villagers are filmed dining on live fish in a video that has been widely condemned online.
The clip shows twitching fish being pulled from a bucket of water and thrown into a bowl of green sauce before being picked up and eaten alive by diners using chopsticks.

Several people can be heard laughing as the fish thrash around frantically in the bowl.

The clip is believed to have been filmed in China, where the practice of eating live fish is both popular and controversial. 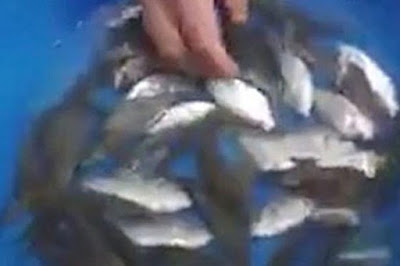 Some chefs maintain keeping the fish alive while eating it maintains its freshness.

But others argue not cooking the fish means diners could be consuming bacteria and toxins.

And many believe the practice is simply cruel, and causes the fish a large amount of unnecessary suffering.

China is one of the few countries where it is still legal to cook “Yin Yang” fish – or ‘dead and alive’ fish.

The method involves deep frying a whole fish but keeping its head wrapped in a wet cloth so it continues to breathe while being cooked.

It is then served, still breathing, covered in sauce.

BBNaija: Nini to leave show for 24 hours in new twist

Ladun Liadi - September 20, 2021
1
The candidate of the Young Progressives Party in the forthcoming Anambra State Governorship Election, Ifeanyi Ubah, says there will be trouble if the proscribed...

Police arrest man for allegedly having s.e.x with a goat in...