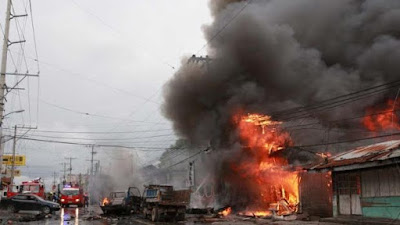 22 Muslim worshippers were this morning killed when two female suicide bombers disguised as men detonated themselves in a mosque in Umarari Village, an outskirt of Maiduguri, during the early morning prayers today.

Umarari is about 5km south of Maiduguri, the northeast Nigeria city where Boko Haram insurgency birthed.

An official of the Civilian-JTF, Alhaji Danbatta, who coordinated the evacuation of victims said 26 other persons were injured in the blast. The blast is the first to be recorded in Borno state since the last that killed about 50 persons at an IDP camp in Dikwa, a town 85km away from Maiduguri.

Gabrielle Union says her soul was ‘shattered’ when she learned Dwyane...

Ladun Liadi - September 16, 2021
4
Gabrielle Union says her soul was 'shattered' when she learned now-husband Dwyane Wade got another woman pregnant while Union was going through IVF treatments...

Gorillas at US zoo being treated for COVID-19

41 year-old mum didn’t realise she was pregnant until she ‘saw...

Over 100 die of cholera outbreak in Niger as Commissoner blames...