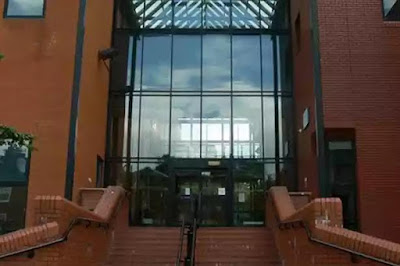 A heartless mum who locked her seven-year-old daughter in the house overnight with just juice and cake while she had s3x with her boyfriend 100 miles away has been spared jail.

The 31-year-old woman, who cannot be named, left the youngster by herself on two separate weekends after telling the girl she was going “a long way away”.

Leicester Crown Court heard she told her daughter not to touch the computer or anything dangerous before locking her in the flat in Leicester.

The irresponsible mum then travelled to visit her partner in London for her own “s3xual gratification.”

She was only caught after concerned neighbours alerted the police, who broke into the property to rescue the child in July 2014.

On Thursday, the woman admitted four counts of child cruelty by neglect, between January and July 2014, when the youngster was aged between six and seven.

But she was spared prison after the judge heard she had given birth to her fourth child and was breastfeeding the tot.

Instead, she was handed a ten-month jail sentence, suspended for 18 months, with supervision.

Judge Michael Stokes said: “You left this child alone so you could fulfil your own self-gratification, both s3xually and otherwise, and you put that before your duty to your daughter – and that’s really unforgivable in a mother.

“To leave a seven-year-old child locked in a flat with no means of access or exit… anything could have happened – a fire, an electrical fault or the child falling.

“There’s a dozen things that could have happened to the child and that must have passed through your mind when you went to London.”

The judge said he was suspending the sentence as, “given the enormous amount of work and investment social services have made, it would be counter-productive to send you to prison”.

He added: “You now have a tiny child who you are breastfeeding and the last thing the court would want to do is send you to prison in those circumstances.”

The court heard left the youngster alone for 20 minutes and then overnight when she was six.

After she turned seven, the mother left her home for the entire weekend on two separate occasions.

Prosecutor Philip Gibbs said: “The girl was barely able to open a window a few inches and the front door was locked with a mortice.

“She conversed with a neighbour through the slightly open window.”

When questioned, the mother admitted leaving the child with just “cake and juice” for the entire weekend, while she visited her boyfriend.

She said she “felt ashamed.”

The pre-sentence report stated the mother “can’t be trusted with children.”

Callinan Clodaghmuire, defending, said many agencies were intensively involved and the defendant has been undergoing courses, counselling and programmes.

JJC Skillz speaks on why marriage to Funke Akindele is working...

Ladun Liadi - September 25, 2021
1
JJC Skillz has revealed why he and his superstar wife, Funke Akindele are still happily married after 5 years. The couple recently celebrated their 5th...

Peter and Omolola Okoye celebrate their first son as he turns...

Tonto Dikeh reacts to Prince kpokpogri’s lawsuit, says you have many...