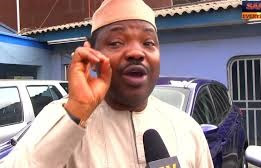 Yinka Odunmakin, the Spokesperson for Afenifere Renewal Group, has dragged the All Progressives Congress and its Lagos Publicity Secretary, Joe Igbokwe to a Lagos High Court urging the court to compel them to pay him N1bn for allegedly defaming him through a publication entitled, “Biafra truth be told” published by them sometime in October 2015.
Also joined in the suit is a Switzerland-based media consultant, Mallam Adekunle Kayode and Today digital News and Media Limited.
According to Odumakin, the defendants in the publication allegedly categorised him among some people it described as “miserable election losers who go back to play ethnic politics and resort to blackmail, primordial sentiments, ethnic and subterfuge when they fail in national politics.” In that regards, Odumakin wants the court to ask the defendants to pay him N1bn compensation for soiling his name.

Police present over N22.7m to 15 deceased officers’ families in Nassarawa...

‘I can allow my man to have s.e.x with another woman...

Bandits kill one, abduct several others in Sokoto

Shock as 13-year-old boy narrates to court how he willingly had...

I’m famous because I am your son, Tiwa Savage’s son tells...

Woman throws her own DIVORCE PARTY after being finally free of...