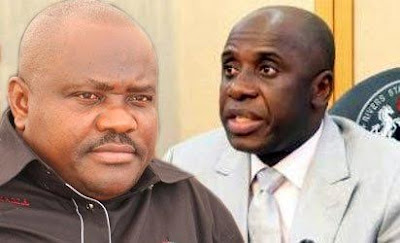 The Rivers State Governor, Nyesom Wike has called on security operatives to adhere strictly to President Muhammadu Buhari’s directives without bias, urging them to arrest the Minister of Transportation, Rotimi Amaechi and prosecute him if he poses any security threat and violates the electoral laws, before, during and after the Rivers State re-run polls.

The Rivers State Commissioner for Information and Communication, Dr. Austin Tam-George who made the declaration in a press statement, said Amaechi’s hotel room and vehicles should be searched to ensure that he was not in possession of sensitive materials of the Independent National Electoral Commission (INEC), before, during and after the election.

The Commissioner said, Amaechi’s plot to truncate the electoral process in Rivers State through the instigation of violence had been perfected two weeks ago.

Fani-Kayode lied about my defection to APC – Governor Umahi

Ladun Liadi - September 17, 2021
3
Governor of Ebonyi State, Dave Umahi, has rubbished Femi Fani-Kayode’s claim that he contributed to his (Umahi’s) defection to the All Progressives Congress (APC). Fani-Kayode,...

Son arrested in Delta over failed attempt to use mother for...

Mystery as two-year-old twins fall 10 floors to their deaths while...