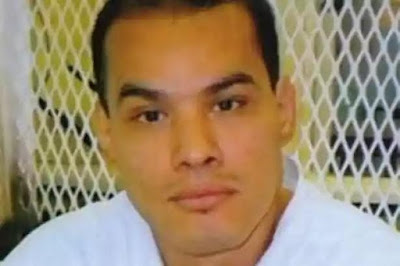 A murderer who cut the throat of a 12-year-old boy, drank his blood and sickeningly mutilated the body has been executed. Pablo Lucio Vasquez was put to death by lethal injection at the Texas state death chamber in Huntsville.

Vasquez killed 12-year-old David Cardenas in the town of Donna in Texas in April 1998. On the night of the murder, Vasquez, then 20, attended a party with his 15-year-old cousin Andy Chapa and met the boy.

Afterwards, the three were walking home when when Vasquez – who was drunk and high on cocaine – picked up a pipe and hit David over the head, then cut his throat.

The cousins took David’s body to a field, where they scalped him, cut off one of his arms and part of the other and removed the skin from his back.

They also robbed him and then attempted to crudely hide the body under aluminium sheets.

Vazquez was quickly picked up by police and admitted the murder. He also told officers he had drunk his blood.

Chapa later testified that Vasquez killed the boy because the child did not “give him what he wanted.”

During his trial, Vasquez said: “The devil was telling me to take [David’s head] away from him.”

On a videotaped confession shown to the jury, he said: “One side of my head said, ‘You did wrong. The other side said, ‘Keep doing it. Keep doing it’.”‘

About four hours before the planned execution, the US Supreme Court denied a petition to halt the proceedings. Lawyers for Vasquez argued that he had serious learning difficulties and was mentally ill, and therefore incompetent and should not be executed.

The execution is the sixth in Texas, and the 537th since the state reinstated the death penalty in 1976.

Chapa was sentenced to 35 years in prison after pleading guilty for his role. Three others were convicted of helping to cover-up the murder.

Ini Edo welcomes daughter through surrogacy, says her dad is just a donor

Ladun Liadi - December 1, 2021
1
Civil servants and the general public without proof of vaccination and negative PCR tests are currently being prevented from accessing government buildings in Abuja. The...

I gave up jewelry because of God – Folorunso Alakija reveals

Clem Ohamaze breaks down in tears as he gets N8m from...