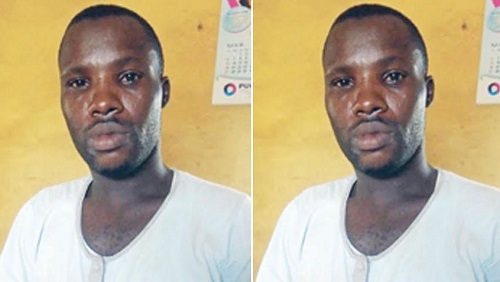 The driver, Yusuf Ogunbiyi
Rapid Response Squad (RRS) operative, Corporal Nasir Abdul, was yesterday knocked down by a hit-and-run driver, who was trying to evade arrest for traffic offence. Abdul was rushed to the nearby Accident and Emergency Centre at the Old Toll Gate following the accident, which occurred on Ikosi Road around 5pm.

The driver, Yusuf Ogunbiyi, 35, an auto–technician was chased and arrested at his workshop on Ogundele Street, off Ikosi Road by another team of RRS riders.

Ogunbiyi, who drove a Toyota Sienna 2003 model marked LSD 573 DR, said he was going to Oregun from Mowe, adding: “I got to 7up, I didn’t know the outlet from Ikosi Road was one-way, I entered it and I was waved down by a Traffic Police Officer and a Lagos State Traffic Management Authority (LASTMA) official but I tried to evade them, unknowing to me, an RRS rider was equally trying to stop me but the vehicle was too close to him, I swerved off immediately in a bid to escape.

But, I ended up knocking him (RRS rider) off the road with the bumper. I was too shock and afraid, even though my colleagues in the car told me to stop, I sped off. They traced me to my workshop and that was where I was arrested.

“I am sorry for everything; I didn’t know that place is one-way. I just finished my apprenticeship and looking for funds for my graduation.”

2021 remains our best year ever, Obi Cubana says as he shares lovedup photos with wife