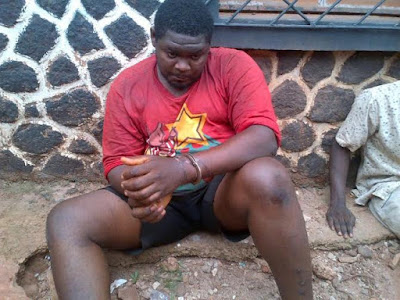 The police in Enugu State have nabbed a two-man gang suspected to be behind the recent missing and serial killing of tricycle riders in Enugu whose bodies were exhumed from an uncompleted church at Ugwuaji along the Enugu Port-Harcourt road.

The reported disappearance of three tricycle riders popularly known as keke all of whom hail from the northern part of the country led to the discovery of other decayed bodies in an uncompleted building about a month ago and subsequent arrest of the two suspects.

It was however discovered that the gang had already killed seven persons and made away with their tricycles.

Parading one of the suspects before journalists in Enugu on Tuesday, the state Commissioner of Police, Nwodibo Ekechukwu, noted that the duo of Nonso Azubuike and Kennedy Ihunegbo started the crime of killing and robbing commercial motorcycle riders of their bikes in Abuja in 2014 before they moved over to Ado area of Nasarawa State.

They had a failed operation in Keffi the same year when a man they thought they had killed raised the alarm leading to the arrest of Nonso who managed to get out of the case before both of them relocated to Enugu in January this year.

In Enugu they operated by stopping and entering tricycles at a point along Ogui Road or Mosque area of Artisan and requesting the rider on each occasion to drop them at their purported building site at Ugwuaji, off the Port-Harcourt expressway.

At the fake building site usually a lonely place the suspects would request the keke rider to carry blocks for them to another location. The unsuspecting victim would be hit on the head with a very heavy iron hammer as he bends to carry the block.

Nonso who confessed that they had killed seven keke riders since January, said they would thereafter take away the victim’s tricycle, wipe off the fleet numbers and sell to prospective buyers.

The commissioner of police disclosed that the second suspect, Kennedy, fell ill and was taken to Enugu State University Teaching Hospital, Parklane, Enugu where he died.

Ganduje leaves for US, hands over power to deputy

Dowen College: Twitter user walks out on Priest after he suggested...

Ladun Liadi - December 6, 2021
1
A twitter user, @Uche_swish has explained why he waled out of church yesterday. He said the priest at his church had insunuated that the children...

Police officer on rampage with AK 47, kills wife, 5 others...

Late TB Joshua, Sambo Dasuki, others made effort to save my...