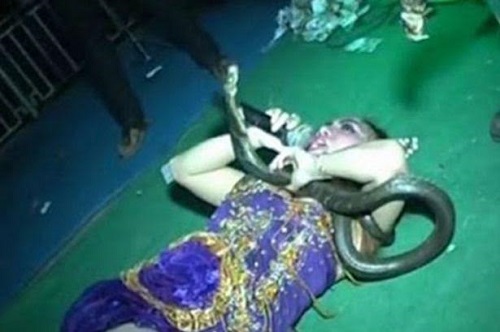 A pop star who kept on singing for an astonishing 45 minutes after she was bitten mid-performance by a cobra has collapsed and died onstage.

Irma Bule was known for wearing snakes during her acts, but the king cobra which she danced with on Sunday had not been defanged.

The 29-year-old was performing in a village in Karawang, West Java, in her native Indonesia when the incident happened.

After her first song, she accidentally stood on the cobra, called Rianti. The reptile then bit her on the leg, injecting venom into her bloodstream. A video appears to have captured the moment.

“The accident happened in the middle of the second song when Irma stepped on the snake’ s tail,” audience member Ferlando Octavion Auzura, told local media.

“The snake then bit Irma on her thigh,”

Although the star kept her show going – reportedly turning down an antidote from the snake handler – after 45 minutes witnesses said she started vomiting.

After a number of seizures, she collapsed. Irma was then taken to hospital , but passed away soon
after.

Bule’s musical genre is known as dangdut and uses props onstage. She has previously reportedly danced with pythons and boa constrictors as part of her act.

China BANS celebrities from showing off their wealth on socal media

Ladun Liadi - November 25, 2021
2
China BANS celebrities from showing off their wealth on socal media... China is taking steps to address what it calls its "chaotic" celebrity fan culture...

Tania Omotayo, calls out a lady who used a fake alert...