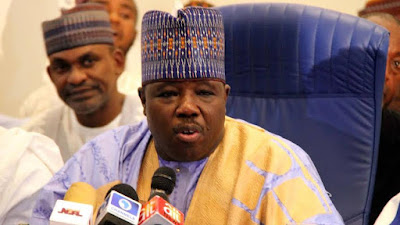 The Peoples Democratic Party (PDP) has asked the governing party, the All Progressives Congress to face the business of governance and stop pushing over its administration’s shortcomings to others.

The opposition party said almost one year after it has been handed over the affairs of the country, APC ought to have been able to chart its own course and stop blaming PDP for its administrative lapses, The National Chairman of the party, Senator Ali Modu Sheriff said.

President Muhammadu Buhari had on Monday said Nigerians should hold the PDP’s 16-year reign responsible for the nation’s prevailing economic woes and said the party failed to save for the rainy day. Also following the lingering fuel scarcity that has continued to ravage the nation, the National Leader of the APC, Asiwaju Bola Tinubu, asked Nigerians to hold the PDP, responsible.

However, speaking at the inauguration of four special committees for the forthcoming National Convention of the party, PDP National Chairman, Senator Ali Modu Sheriff, expressed dismay that almost one year since the government the was handed over to the APC, the party is still blaming PDP for current fuel scarcity in the country.

“The leadership of the party share the pains of Nigerians after one year in office of the All Progressives Congress-led government. Nigerians now have the opportunity of comparing the PDP and also the APC. The ultimate judge of this exercise are Nigerians.

“I would like to advise the leaders of the APC to stop blaming us in the PDP, we are now in the opposition party, repositioning our party to show Nigerians that we could do better.”

BBN’s Maria finally explains how she got SWOLLEN lips