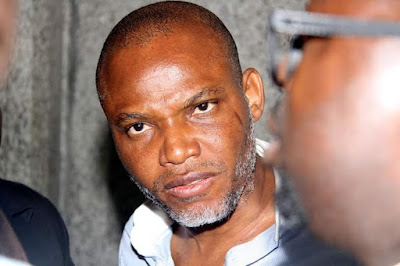 The United Kingdom says it has been visiting the leader of the Indigenous People of Biafra, Nnamdi kanu, in prison. A spokesman for the British High Commission, Mr. Joe Abuku, said this in an email sent to Punch on Friday.

Abuku said this in response to an email regarding Kanu’s letter to the High Commission.

The statement read, “We have provided assistance to Mr. Kanu since his arrest in October last year, including visiting him regularly in prison and attending court appearances in an observation capacity.”

The detained Biafran agitator, who is also a British citizen, had written a letter through his lawyer, Ifeanyi Ejiofor, that the British government should not abandon him.

He had said, “It is repeating the obvious to state that our client is a full British citizen, by virtue of which position he is entitled to all rights, privileges and protection, guaranteed
under the British laws and conventions.”

He also argued that the President Muhammadu Buhari-led administration had violently abused his fundamental human rights through his prolonged detention in prison custody, adding that there was no way he would get a fair hearing.

Sunday Igboho under EXTRADITION procedure back to Nigeria

Ladun Liadi - November 23, 2021
1
Yoruba Nation agitator, Sunday Adeyemo, popularly known as Sunday Igboho is currently under extradition procedure back to Nigeria, The Punch reports. In a series of...

Five dead after car ploughs into Christmas parade at Wisconsin