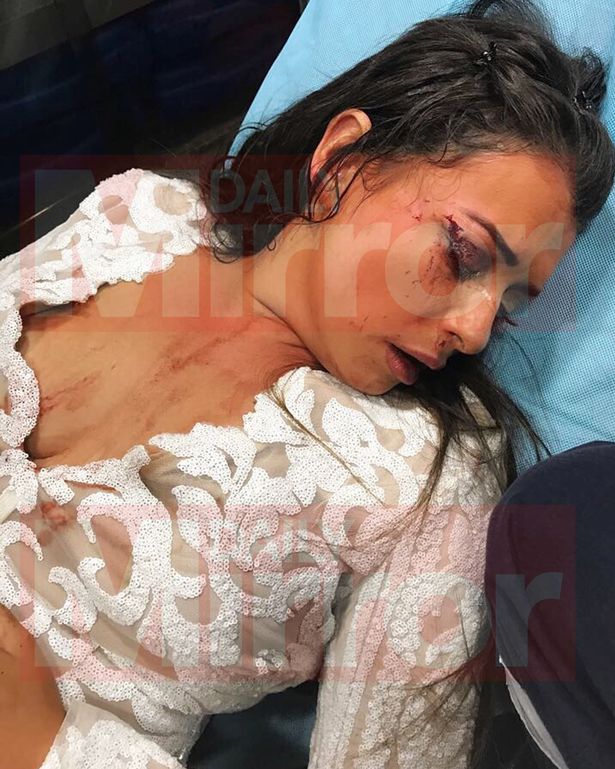 A British woman claims she was glassed by a jealous air hostess ­during a night out with love split boxer Amir Khan in Dubai.

Make-up artist Bia Hannides, 22, was partying with the star in an exclusive club there on Sunday night when she says the Lebanese woman attacked her.

Bia was rushed to hospital with a gaping wound over her eye, her designer white dress covered in her blood.

She was there for 12 hours having stitches and doctors have told her she will be permanently scarred.

At one point she even feared she would lose her sight, and says the trauma has changed her life.
Bia, from Southampton, said: “I could have lost my eye and now my life is ruined. I will never be able to go into a club again and I’m probably going to need surgery when I get home.”

But she claimed Khan offered no help after the attack because he was allegedly worried about attracting “bad press”.

The next day the boxer, 30, sent Bia a message saying: “I get punched in the face for a living and still get the best girls. Same for you.

“You will get the best guys regardless, scar or no scar.”

In another message he said, apparently talking about the attacker: “Babe she wasn’t with us. I’m sorry. How are you feeling?”

Bia, on holiday in Dubai with mum Denise, 53, said she was introduced to Khan on Sunday – two days after his very public split from his wife of four years, 26-year-old Faryal Makhdoom.

They swapped numbers and she was thrilled when the star invited her to join him at the exclusive Billionaire Mansion club that night.

He met her outside the venue at around 1am on Monday, and she and her mum joined him, his brother Haroon and beauty adviser Gulbahor Becknazar in a roped-off VIP area.

Pictures taken on the night show Bia with both Amir and his brother.

She said: “We were all just having a really, really good night and it was just a small group of us. We were all with Amir and he was keeping it very close knit.

“If he lost sight of me he would always try and find me or pull my hand. He was looking after us. We were all dancing and happy and having a really good night.

“He had his hands around my waist and was flirting a bit – but in a really friendly way.”

But she said the night then turned sour after a Lebanese air hostess tried to join the group.

“I had this beautiful white dress on, we were all having a good time and maybe because Amir wasn’t giving her the time of day, she was jealous.

“Amir’s brother was saying to her, ‘What are you doing in this circle in our area’ and it must have upset her. It was really crowded and you were
accidentally brushing into everyone around you – that’s just how it is.

“She said to me, ‘You’re pushing into one of my friends’ and I told her I hadn’t even touched her friend.

“Next thing she went to hit me, but I was with it, so I grabbed her wrist – and with her other hand she glassed me straight in the face.”

Bia was helped into an ambulance outside by security staff.

She needed five stitches in a gash above her right eye.

Doctors were unable to stitch a second cut on her eyelid because of the delicate nature of the skin.

“It was absolutely horrible,” she said. “Amir and his brother said they couldn’t come with us because it would be bad press. I understand, but I would have expected him to find out what happened to me when he left.

“I think all he could think about was how it would look in the papers.”

Iyabo Ojo Excited To Be On Set With RMD For The...

‘I’ve Watched You Endure Things That Would Have Broken A Lot...

Woman Runs Mad In Lagos After Alighting From SUV

BBN’s Angel Reveals What Scares Her Most About Marriage

I Don’t Want To Die – Actor Remmy Ohajianya Says As...

Terrorism: The Worse Is About To Happen, – Primate Ayodele Warns