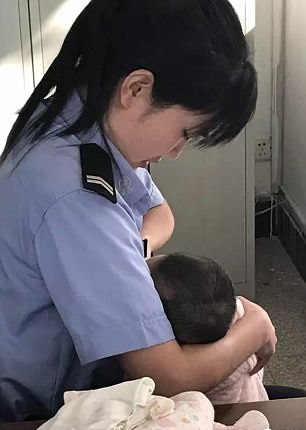 A mother’s love is unconditional.Hao Lina, a police officer in China, has melted the hearts of millions after breastfeeding the four-month-old baby of a suspect.

The infant’s mother was attending a trial and could not nurse her crying child. She had given permission to Ms Hao before letting her baby be fed.

The baby’s mother was charged with fraudulent fund-raising, illegally absorbing public deposit and crime concealment with 33 other people, according to the court.

Ms Hao, a mother herself, said the baby had been left under her and her colleagues’ care before its mother went for the trial.

‘The baby wouldn’t stop crying and we were all worried,’ said Ms Hao.

‘I am a new mother, I could feel how anxious the child’s mother would have been. All I thought about was to try my best and comfort the tiny baby.’

After gaining the permission of the baby’s mother, Ms Hao found a quiet corner in the building and breastfed the baby.

The baby’s gender has not been revealed.

The scene was captured by one of Ms Hao’s colleagues.

Shatta Wale, 3 others arraigned and remanded for lying singer was...

Ladun Liadi - October 21, 2021
2
Shatta Wale and 3 others have been arraigned and remanded for lying the singer was shot. The dancehall artiste and his three accomplices were remanded...

Fan questions Davido’s sister, Sharon for wearing a bikini since she...

Woman shares before and after snaps to show reality of ‘perfect’...

Police men causing traffic at 2am on the Island just to...

NSCC sets up squad to tackle abuse of elders

I won’t withdraw my lawsuit against PDP – Secondus vows