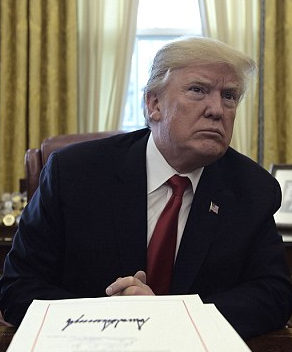 President Donald Trump fired off a warning tweet to North Korea Tuesday night, taunting leader Kim Jong Un who said in his New Year speech that Americans should be aware he has a ‘button’ for nuclear weapons.

Trump warned the hermit country: ‘North Korean Leader Kim Jong-Un just stated that the ”Nuclear Button is on his desk at all times.” Will someone from his depleted and food starved regime please inform him that I too have a Nuclear Button, but it is a much bigger & more powerful one than his, and my Button works!’

The threat came after an annual speech given by Kim, in which he cautioned: ‘The U.S. should know that the button for nuclear weapons is on my table.’

Kim warned America that it can ‘never start a war against me and our country’ and insisted his nukes are now a reality, not a threat.

Despite the ongoing war of words, Pyongyang this morning revealed it will reopen a hotline with South Korea to discuss attending the Winter Olympics.

Ladun Liadi - November 29, 2021
1
Ontario’s Ministry of Health has confirmed two cases of the Omicron COVID-19 variant, in two individuals with recent travel from Nigeria. The two travellers have...

Tristan Thompson expecting baby no. 3, according to new paternity lawsuit