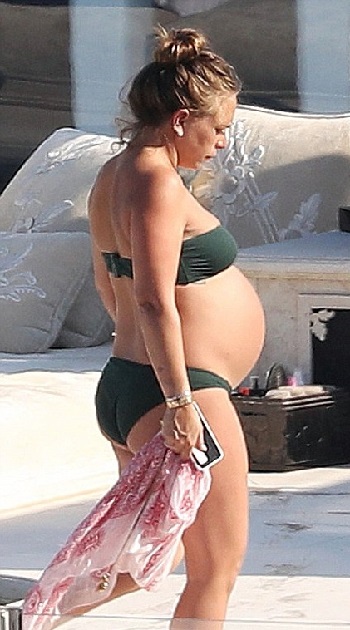 She’s been keeping a low profile since it was revealed she is expecting her first child with boyfriend Jeremy Meeks.

Yet Chloe Green proudly displayed her burgeoning baby bump as she enjoyed a holiday with her Hot Felon beau, taking to the high seas on her billionaire father Philip Green’s luxury yacht on Sunday.

The Topshop heiress, 27, who is reportedly due in June, looked in good spirits on the babymoon as she flaunted her gorgeous pregnancy curves in an emerald green bandeau bikini that also aided in flattering her tanned complexion.

Boasting a healthy pregnancy glow, the mother-to-be looked radiant as she went make-up and swept her glossy chestnut locks away from her face in a topknot.

Clutching a pink kaftan, the Topshop heiress looked in good spirits as she chatted with her boyfriend, who she controversially began dating last year whilst he was still married to Melissa Meeks, who he also shares a child with.

Despite reported ongoing drama with his estranged wife, Jeremy – who earned himself the nickname Hot Felon owing to his smouldering viral mugshot – looked in good spirits as he chatted away with his pregnant girlfriend.

Beaming broadly, the model also showed off his musclebound physique on the boat trip as he donned a pair of grey swimming trunks as he sunned himself aboard the luxury cruiser.

Earlier this year it was claimed that Chloe is not only expecting her first child with Jeremy but is engaged to the former convict as well.

‘The family are fully on board planning a wedding, and Tina [Chloe’s mother] is looking forward to being a grandmother,’ a source told The Daily Mail. ‘Chloe has been telling everyone that she is having a little boy.’

Ladun Liadi - October 14, 2021
3
Police in Thika, Kenya are holding a Thika GK prison officer, who allegedly r*ped a stranded 21-year-old woman, in the pretence of accommodating her...

Man storms school with cutlass to hack teacher who beat his...

Woman in court for removing neighbour’s teeth with slap

I will explore the music and movie industries soon – Liquorose

Annie Idibia parties with brother amidst report of tuface and pero...