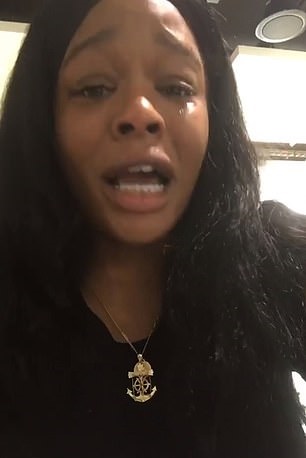 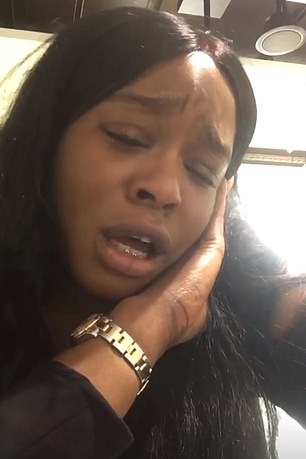 Azealia Banks has launched an extraordinary tearful rant at Aer Lingus staff after a row with a stewardess before a flight from Gatwick to Dublin.

The 27-year-old called Irish women ‘ugly’ and used foul-mouthed racial slurs during the bizarre tirade which she shared on her Instagram story.
The musician removed herself from a morning flight to Dublin, ahead of her sold-out gig at The Academy in the Irish capital on Tuesday.
She claimed she had been ‘banned’ from the airline after leaving the flight, saying she had been ‘treated like a wild animal’ on what she called her ‘travel day from hell’.

The airline has confirmed she left the 10.55am flight from Gatwick but declined to comment on her specific allegations.
Banks famously launched a foul-mouthed tirade at a flight attendant calling him a ‘f***ing f***ot’ when she was unable to get off a Delta plane in 2005.
Taking to social media today, she said a stewardess had accused her of threatening to ‘sort you out’.
The musician denied she had used those words, saying she was from New York and would not have used that turn of phrase.
In a series of Instagram stories she said: ‘Every time I come to the UK, they always make some s**t with these airline people.
‘They are always starting s*** with me. I had my bags deep in the plane and the lady was asking me some questions.
‘I was trying to find my passport as I didn’t have the answers and she was staring at me. I said. “Don’t stare at me”.
‘She goes to the Captain of the plane and said that I said, “Don’t stare at me or I’ll sort you out”. I’m from NYC, I don’t use that slang.’
She continued: ‘They crowded round me like I’m some sort of animal saying, “we’re going to have a problem”.’
‘I get off the plane. I’ve worked too hard in my life to be cornered by some ugly Irish b***h. They are ugly Irish women here.
‘Then all these security n***** come over treating me like a wild animal. They tried their hardest to get me to do something or freak out.’
She said: ‘B**** you’re not going to play me over no f***ing Aer Lingus flight. You’re not going to disrespect me and make a f***ing spectacle out of me’.
Azealia then said her manager had managed to book her on a flight with a different airline, so she could still make her gig.
She claimed she was banned from the airline, adding: ‘Now they’re like, “you can never fly Aer Lingus because you got off the plane”. At first, they were trying to get me to stay.
‘…They kept saying, “Call the police, call the police”,’ before the artist made a racial slur.
An airline spokesperson said: ‘Aer Lingus can confirm that two guests scheduled to fly on 10:55am flight from London Gatwick to Dublin (EI233) this morning disembarked themselves prior to departure.
‘The guests in question got off the plane safely of their own accord, while all other guests remained on board. As they had luggage in the hold, the flight was delayed while that luggage was sourced.
‘The flight departed Gatwick at 12:07 and landed in Dublin at 13:22. Aer Lingus has a strict no-tolerance policy towards disruptive guest behaviour.
‘The safety and security of our guests and crew remains our first priority.’

You know she is a baby – Regina Daniels’ fan slams...

Ladun Liadi - October 11, 2021
3
Ha, people are still on this matter. A fan has slammed Billionaire Ned Nwoko for marrying Regina Daniels. Ned while sharing a video of his...

Annie Idibia parties with brother amidst report of tuface and pero...

Omawumi reveals likely traits of those born in Nigeria

Some Madagascar villages haven’t seen rain in 10 years as hunger...