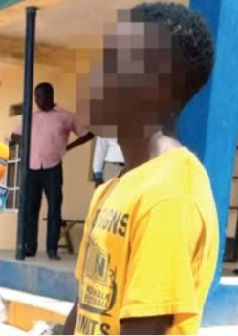 Gombe State Police Command on Tuesday paraded some suspected cyber fraudsters. One of them, 16-year-old Gabriel Michael, said he was influenced by the lifestyle and songs of a Nigerian musician, Naira Marley.

16-year-old Gabriel Michael, who was arrested by the Gombe State Police Command for cyber fraud.

Michael, who was paraded on Tuesday by the police, told  one of our correspondents that he took to cybercrime from watching up-and-coming Nigerian musician, Naira Marley, on the screen.

“I learnt hacking through tutorials on YouTube; for so many months I was at it. The lifestyle of a Nigerian musician, Naira Marley, the way he spends money influenced me. Marley talks about being a Yahoo boy (cyber fraudster). My addiction to computer started at the age of seven,” Michael said.

Among Naira Marley’s few known titles,  the song, “Am I a Yahoo Boy?” may be the most viral.

The lyrics and the video of the song revolve around cybercrime and a race against law enforcement agents.

Though the police put his age at 18, Michael, in a chat with one of Punch correspondents, insisted he was 16 years old.

He said, “I’m 16 years old, from Kaltungo Local Government Area of Gombe State. I finished from the Nationwide Academy in Gombe. I was arrested for hacking into someone’s account.”

In his response to how he succeeded in hacking account, he said, “I generate software like IP protocol, Angry IP scans, linos and I use them to do the job.”

Michael, however, begged for mercy, saying “I regret my actions. I pray to be pardoned, so that I can use my talent in other to work for them (law enforcement agency). I can channel my ideas to legal ventures but the challenge has always been that nobody encourages one to use his talent to do good things. For instance, friends will push you to do so because you are making money. My ambition is to work hard to become a member of the Department of Security Services.”

Michael added that his parents did not know about his criminal activities.

“I hide under the cover of my job; I’m into aluminum works. My parents did not suspect my heinous activities,” he said

Michael narrated how he hacked into the bank account of his victim, Deborah Tanko, from whose account he allegedly withdrew N187,000.

Red meat is poisonous, God didn’t create it for consumption –...

Actress Wumi Toriola celebrates her son as he turns 2