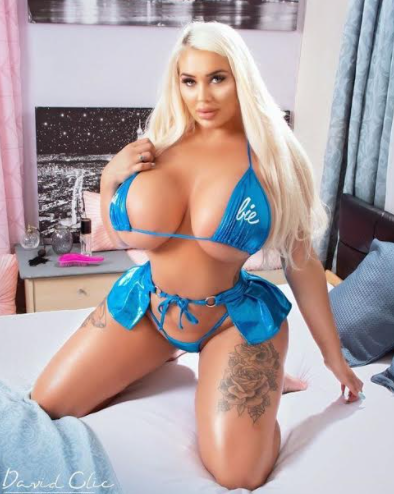 A young woman has explained she has spent a massive £38,000 in two and a half years to look like a “bimbo”.

Amber May, 22, an adult TV presenter, funded her surgeries through stripping.

She says that people tell her she looks like a Barbie doll and that she’s addicted to plastic surgery.

The young Brit, from the Midlands, claims she’s been having fillers since 18.

When Amber turned 19 she had her first boob job which took her from a 34C to a 34F – the biggest a UK surgeon would agree to.

Within weeks of her breast augmentation she had booked to go under the knife again.

Amber said: “I had my first surgery on my boobs when I was 19, funded by working in a club five nights a week.

“I knew I always wanted them big and fake but I had surgery in the UK and they would only go up to 535cc so 12 weeks after my first surgery I booked with Dr Plovirr in Belgium, he does the big xl fake implants.

“I’d seen girls on Instagram and loved their size, so I told the surgeon to go as big as possible!”

The second surgery required 1650cc implants and it took her to a 36K.

But the investment seems to have been worth it as her curvy look has helped her to gain an huge online following.

Ladun Liadi - July 23, 2021
3
LeBron James Becomes First Active NBA Player With $1b In Career Earnings   Being the country's biggest and most well-known athlete for nearly 20 years has...

I Met My Wife While Living In One Room – Obi...

Man Sneaks Into Farm To Have S.e.x With Horse And Gets...

No Briefing On Igboho’s Arrest Yet – Justice Ministry

There’s No Shame In Sleeping With Different Men – Married Shade...

Obi Cubana, Friends On Yacht In The Maldives [Photos]