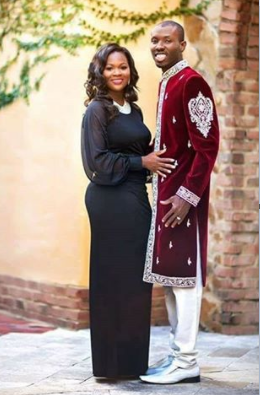 A  Central Florida religious leader — a self-described prophet named Sylvester Ofori has been arrested and accused of gunning down his wife outside of the Orlando credit union where she worked.

Ofori, the 35-year-old pastor and founder of Floodgates of Heaven International Ministries, was charged with first-degree murder in the slaying of his wife, Barbara Tommey, outside of the Navy Federal Credit Union by the Mall at Millenia.

Tommey, 27, “was shot near the front door of the business by her husband, Sylvester Ofori,” Orlando Police said in a brief statement Tuesday night.

Tommey was shot just before 9 a.m. Tuesday. She was rushed to Orlando Regional Medical Center, where she died, Orlando Police said.

Ofori is being held at the Orange County Jail without bond. He was booked into the facility at 9:39 p.m.

Police said “detectives worked tirelessly throughout the day in order to achieve the following outcome in this case.”

They also said officers obtained a warrant and searched the couple’s apartment, where Ofori was taken into custody. Additional details were not released.

Tommey was the assistant manager of the credit union, where she worked for more than five years, according to a Linkedin profile. It said she graduated from the University of Central Florida in 2015 with a bachelor’s degree in finance. The profile said she was working on a master’s degree in strategic communication and leadership at Maryville University of Saint Louis.

Ofori and his ministry have an extensive social media presence. The Facebook page for Floodgates of Heaven International Ministries has 5,552 followers. His page has 61,756 followers.

The page describes Ofori as a prophet and motivational speaker.

“I truly believe that every single person has to go through something that absolutely destroys them so they can figure out who they really are,” says an August 23 post on his page.

The physical address of his church is 44 Coburn Ave., Orlando. Its Facebook page says the ministry is dedicated to helping those who need to increase their “prayer life.”

“We believe that prayer changes things & the bible says that the prayer of a righteous man availeth much,” the page says. “We are praying that God’s will be done on earth as it is in heaven.”

A website to hire speakers and entertainers says Ofori was born in Accra, Ghana.

“He attributes his zeal for God to his parents who instilled the fear of the Lord in the hearts of all five of their children,” his bio reads.

As an anointed and chosen man of God, Ofori “flows in the gifts of the Holy Spirit” and he has Christ-like powers and a knack for interpreting dreams.

Ofori has healed the sick, cast out of demons, and battled witchcraft, the site says.

“Clothed in the spirit of humility, he acknowledges that he is totally dependent upon Jesus, as he is able to do nothing of himself,” the bio adds. “He is always careful to give credit to God.”

I Enjoy What I Once Envied Others For – Uche Ogbodo

Ladun Liadi - August 16, 2022
2
I Enjoy What I Once Envied Others For – Uche Ogbodo Actress Uche Ogbodo has recounted times she once envied persons living the ‘good life.’ Ogbodo...

Dele Momodu Reveals His Phone Conversation With Atiku This Morning