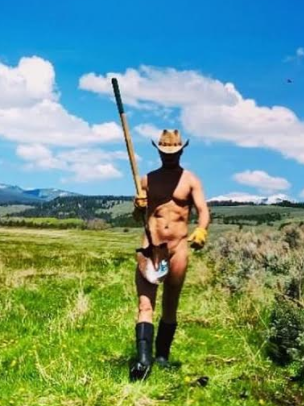 Dick Powers [his name tho, lol], a 36-year old rancher from Montana loves to share pictures of himself n3ked outdoors to the delight of his fans on instagram.

He explained being n3ked ‘frees his spirits’ and hopes to one day expand his ranching business by offering tours to fellow naturists.

He said: ‘I love being n3ked and I love being a naturist. Anything which involves a blade I avoid for safety reasons.

Dick says his love of nature was awoken as a child growing up in Florida’s Everglades.

‘I played a lot of sport growing up and was part of the American Indian Scouts – which is similar to regular Scouts, but a lot more primitive,’ he said.

‘You learn how to survive off the land in a more traditional manner, like the Native Americans do.

‘It was there that I started to build a connection with nature.’

Brainy, too, Dick loved science and, in September 2007 won a place at the University of Wyoming to study geology.

He said: ‘I’d always enjoyed the outdoors and science was my preferred subject at school, so I wanted a profession that would let me do both.’

After graduating in 2010, Dick spent three years working on an oil rig, clearing his student debt and saving.

Using his savings, in 2015 he funded a post graduate degree studying renewable energy development at the University of Montana – a stone’s throw from his parents’ ranch, where he spent weekends working the land.

Dick says he’s not shy about going n3ked. He said: ‘As kids we ran around n3ked, so I’ve never been shy and there’s nothing quite like taking a dip completely n3ked – you feel at one with the world. Once you’ve experienced it, it’s hard to go back.’

Now he does everything from mow grass on his tractor to digging ditches and irrigating fields completely n3ked.

And in May last year, he took up his friend’s suggestion and started posing pictures of himself working na3ed on Instagram under the alias, The N3ked Rancher.

‘My friend felt it was a good idea and I thought, ‘Why not?” he said. ‘It turns out she has a lot of gay buddies and they all went wild for it. They all liked the photo and shared it and before I knew it I had hundreds of followers.

‘I’m straight, but I find it very sweet and very flattering. There are occasions when people, mainly men, will message or comment asking me out on a date. I’m not intimidated by that thought, as I have a lot of gay friends.

Termites Allegedly Eat Up Documents On N17.128b Expenditure At NSITF

Toyin Lawani Opens Up On Loss Of Her 4th Pregnancy

Glad My Mother No Longer In My life – Temmie Ovwasa

Father & Son Paid To Drain A Well Die Inside It

Prince Harry And Meghan Markle Will Visit The UK Next Month